From October 18-24, my family and I flew to Pennsylvania to participate in the American Society of Railway Artists (ASRA)’ “Artists-in-Residence” event at the Railroad Museum of Pennsylvania in Strasburg. At the museum, we met and got to know people like the museum’s director, Patrick Morrison, the ASRA’s director, James Porterfield, and fellow guest artist Gilbert Bennett. I cannot thank everyone involved with this special occasion enough, for it was an honor to participate. I hope to see you all again in the future!

Locomotive No. 340, the “Green River,” arrives at the Calico Depot after completing a trip around the heart of Knott’s Berry Farm in Buena Park, California. Originally No. 400, this 1881 Baldwin-built C-19 Class Consolidation originally worked on the Denver & Rio Grande Western Narrow Gauge Railroad in Colorado and New Mexico. It was one of two locomotives purchased by Walter Knott for operational use on what would become the Ghost Town & Calico Railroad, which opened in 1952. 70 years since its opening, this railroad remains one of the park’s signature attractions.

From July 1-4, the Nevada State Railroad Museum in Carson City, Nevada, hosted the Great Western Steam Up to celebrate the 150th anniversary of the Virginia & Truckee Railroad’s completion. My family and I were fortunate enough to visit this once-in-a-lifetime event with many visiting locomotives on the property. My brother and I had the rare opportunity to ride on Coach 4 pulled by the “Inyo,” and I cosplayed as Secret Service Agent James T. West from the classic TV series, “The Wild, Wild West” (1965-69), in addition to meeting new friends in person for the first time!

It’s beginning to look a lot like Christmas again! Here is a holiday greeting card featuring one of my artworks!

I just learned that my friend Craig Miller had passed away in September of this year according to the Golden State Toy Train Operators’ newsletter. I have known Craig since 2014 when I met him at the Santa Cruz Museum of Art & History‘s toy train exhibit. He shared with my brother and I a passion for model trains and an ever-enthusiastic outlook on life that was truly inspiring and one that helped him persevere in the face of his declining health in his later years. He was such a generous and giving soul who not only helped build my O-gauge collection but was a dear friend whom I shall truly miss.

Thirty of Ken’s original train arts are displayed at Stable Life Services at 18 Seascape Village, Aptos, CA. The office is open from 10 to 2 on Mondays, Tuesdays, and Thursdays. Call ahead at 831-708-2316 before visiting.

Thirty-two of Ken Muramoto’s original American train arts will be displayed at the Hotel Paradox, Santa Cruz during this holiday season. This exhibit include a recently completed canvas piece entitled “From Sea to Shining Sea“. Ken was the featured artist for the 2015 and 2016 Orchard Supply Hardware® Train Calendars and the youngest artist for the train calendars’ 41 year history. He is a member of the American Society of Railway Artists. Currently Ken participates in the Claraty Arts Project in Santa Cruz, CA, who organized this exhibition.

Traveling across the United States, the 1947-1949 American Freedom Train runs past several of this country’s historic cities, landmarks, and breathtaking landscapes. It has been updated to feature emblems and insignias representing the important issues from the unprecedented year of 2020.

High up in the mountains of West Virginia, there is a logging railroad that carried spruce and hemlock for the West Virginia Spruce Lumber Co. The Cass Scenic Railroad operates historic geared locomotives up the steep grades of the Back Allegheny Mountain to the summit of Bald Knob. Here, Shay No. 5 awaits clearance at a switchback. The No. 5 is the world’s oldest operating Shay and is West Virginia’s official state locomotive.

My brother and I rode our first Polar Express train together at Railtown 1897 State Historic Park in Jamestown, California on December 13, and we loved it.

On May 10, 1869, the “Golden Spike” was driven into place at Promontory Summit, Utah as part of the completion of the first Transcontinental Railroad. 150 years later, the Golden Spike National Historical Park celebrated the sesquicentennial anniversary of that historic event complete with two operating replicas of the Central Pacific Railroad’s “Jupiter” and the Union Pacific Railroad’s No. 119. The replicas were constructed by inventor and steam enthusiast Chadwell O’Connor in the 1970s, yet they don’t look a day over 100.

Under a bright blue Nevada sky, an excursion train of the Virginia & Truckee Railroad passes by the Gold Hill Depot on its return trip to Virginia City. Pulling the train is engine No. 29, a 1916 Baldwin-built Consolidation that formerly operated as Longview, Portland and Northern Railway No. 680. It was purchased by Robert C. Gray, who reopened the V&T in 1976 after the line’s abandonment in 1939.

“The Ghost Train of Old Ely”

Nevada Northern Railway ten-wheeler No. 40 exits a tunnel with a pair of vintage passenger cars in tow. This 1910 steam locomotive was built by the Baldwin Locomotive Works and was used to haul passengers on the Nevada Northern from 1910 to 1941. No. 40 is the official “State Locomotive of Nevada” and continues to haul excursion trains as well as the historic “Steptoe Valley Flyer”.

I am saddened to learn about Orchard Supply Hardware going out of business after 87 years. I will miss their friendly customer service and yearly train calendars. It was an honor to have been a contributing artist to their train calendars in 2015 and 2016. Thank you for the wonderful memories! There will never be another store quite like you!! 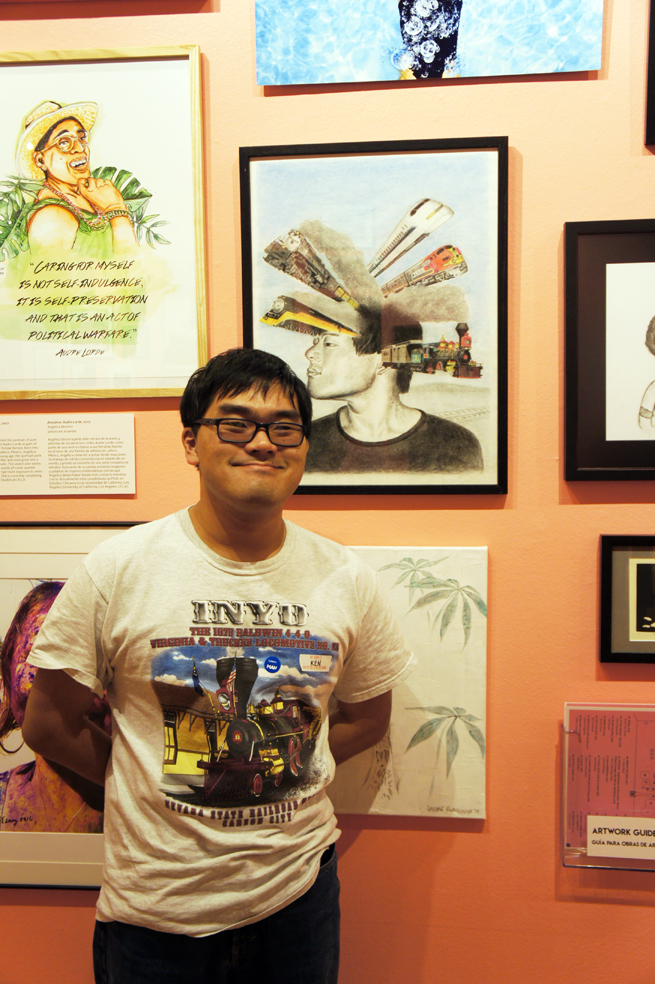 Ken’s self-portrait “One Track Mind” is exhibited at “See, Be Seen; Community Portraits” in the Santa Cruz Museum of Art and History from May 4 to September 23, 2018.

Ken was featured in Railfan & Railroad Magazine’s March 2017 issue under the article, “On a Positive Note” by James D. Porterfield who introduced two train artists with ASD (autism spectrum disorder) and their passion for art and trains. Mr. Porterfield is the Acting Executive Director of the American Society of Railway Artists. Ken joined the society in 2016.

Ken and his family were invited to Al Smith Day at the Swanton Pacific Railroad in Davenport, CA on April 24, 2016. This annual event was organized by the “Cal Poly” Swanton Pacific Historical Railroad Society to honor Albert B. Smith, the former president of Orchard Supply Hardware (OSH) and the founder of the railroad. Five hundred people got together to enjoy train rides, BBQ, and more. Ken exhibited his original arts, sold his art cards and prints, and autographed more than 100 OSH train calendars! Special thanks to Ed and Mary Ann Carnegie and Mary and Lloyd Yoshida for their kind support. Ken is planning to have another exhibit at Swanton’s next event, “Cal Poly Day” on Sunday, October 9, 2016. 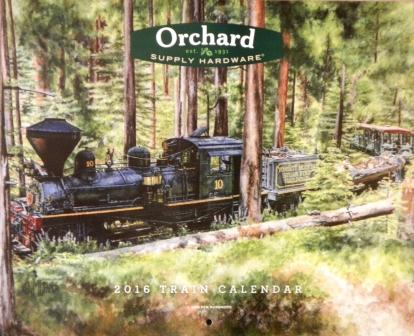 We are pleased to let you know that Ken was selected as the featured artist for the Orchard Supply Hardware (OSH) Train Calendar two years in a row! The 2016 calendar will be available at OSH stores throughout California and Oregon from Monday, November 16. Enjoy his 13 arts on the US and Japanese railroads.